There are many ways we can study the past. Formal history is often the first stop. But in the City & Lake Semester, we have been interested to try out some other approaches, including oral history, reading the landscape, and tapping into primary sources. We’ve been fortunate to have some expert guides leading us in these areas.

We spent most of a day at Rock Point in the shadow of the Champlain Thrust Fault, an uncommonly beautiful beach spot where one can see ancient Dunham Dolostone cliffs sitting on top of a more recent rock formation. Burlington’s City Naturalist, Alicia Daniel, told us about the geologic history of this place, including the surprising story of how (freshwater) Lake Vermont became the (saltwater) Champlain Sea and then drained out after the last Ice Age to become (freshwater) Lake Champlain some 9,000 years ago. Evidence of the many changes over geologic time were all around us, written into the stones. Just for fun, we wrote a poem, stitched together from the jotted-down notes of our first impressions of the place:

The Cliffs at Rock Point –   a poem we wrote together

The sound of the water brushing up on the shore, so beautiful and peaceful here.
A lot of rocks.
Different kinds of rocks, some gray with white lines, others are beige.
Leaves are starting to Fall.
A monarch butterfly migrating to Mexico.
The constant rippling motion of the water, inviting me into the slithering wind.
Crevices of the rocks. 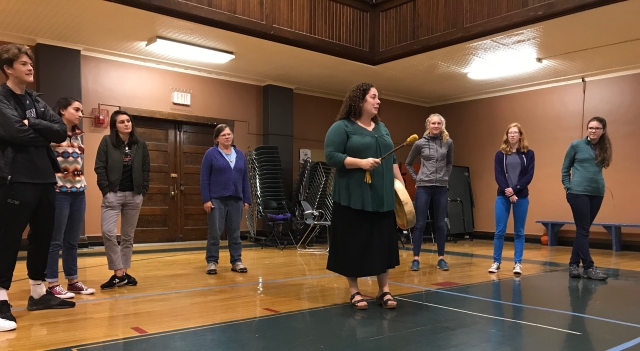 Later in the week, we enjoyed a fascinating afternoon with Melody Walker Brook, a member of the El-Nu tribe of Abenaki, whose ancestors were the first (human) people to live in this part of the world. Melody shared her belief that humans are just the youngest people to join the Circle of creation, with so much to learn from older people, including animals, plants and even rocks! Melody told stories from the Abenaki tradition and her own life that touched on the painful discrimination they have faced – and also the resilience and strength of the Abenaki people and the wisdom of their culture that has been here for some 9,000 years. She was particularly skilled at sharing a different worldview in a way that opened up our curiosity. Although the weather prevented us from meeting her by the lakeshore near Odzihozo/Rock Dunder, she invited us to dance the serpent dance to her drumbeat, and we did! 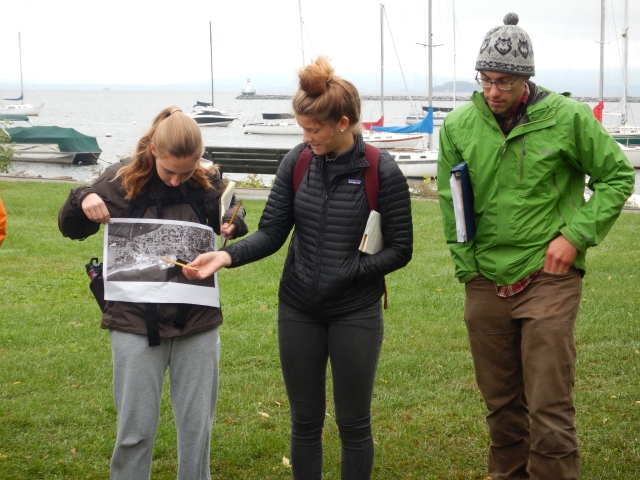 On a chilly, damp day (that’s also part of place-based education!) we walked all over the Burlington waterfront to uncover nearly-hidden parts of its history with the very knowledgeable Sean Beckett and Samantha Ford. Armed with six different maps from Burlington’s past and Burlington Free Press newspaper articles from the 1800s, we learned about the city’s huge lumber industry in the mid 1800s; its marble industry; its ice industry; the coal gasification site and many of the impacts left behind – including the Barge Canal Superfund site. We made many connections to the modern waterfront as well, including hearing the cargo trains rumbling past us, seeing the renovated Ice House and checking out the giant marble sculptures by the shore.

It’s fun to see how every new layer of our learning about Burlington is starting to connect back to earlier layers; and what a central role Lake Champlain has always played in the lives of people inhabiting in this place.