Many Burlington City & Lake Semester students have lived in the city their whole lives. Others have just arrived. We come from different neighborhoods, cultures, identities, and traditions, but there is one thing we share: the fact that we have an address in the Queen City. What that means, however, is another story entirely. Dozens of stories, actually, since each person’s relationship with this place is different.

One of the essential goals for our first few weeks of any BCL semester is to orient (or reorient) ourselves to this place. What is its geography? What is its history? And how have the two interacted with the city’s changing demographics to give this place its character?

To explore these questions, students created personal Burlington maps, explored historical maps, took a Waterfront history walk, co-constructed the city’s timeline, identified historical traces in the Old North End, and hiked a trail where the human-built city meets the Winooski River. With each of these activities, students identified more and more complexity in the built and natural landscape. And once you see these layers, you can’t unsee them. They’re there, as obvious as the streetlights and the corner store. Students’ reflections bear this out. The city has taken on a fourth dimension, and our sense of place has deepened. 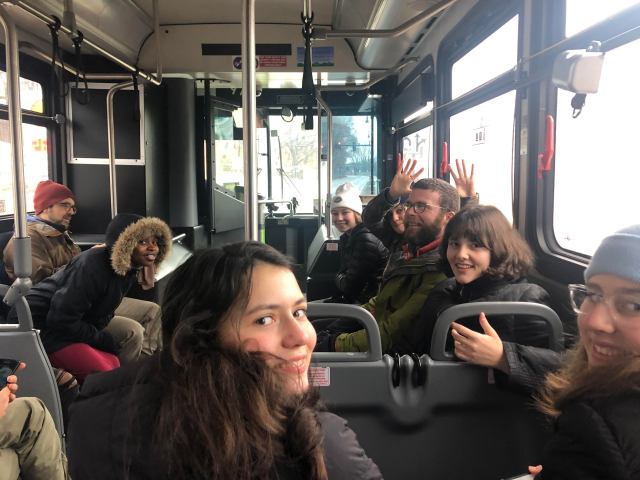 Putting the public back in public transportation

Through these experiences, I was able to get a bit more context as to what Burlington actually looked like throughout history. Though I am taking American History now, it’s difficult to place what I know about Burlington in context with the more significant events of the past few centuries. I learned a lot about Burlington’s industry, and more about what the city looked like as a 19th century logging town. My idea of what Burlington is has definitely been expanded by this historical knowledge.

Since the first week of learning about the history of Burlington, plus the new knowledge from today’s visit to UVM, I’ve gotten great insight into Burlington’s history. I’ve learned a lot more than I knew about Burlington’s past. It was interesting to see how rapidly changes were being made in the city since the 1800s. We looked at images from the 1930-40s of different developing areas. Every picture from every year was drastically different. My favorite changes to see were the newly developed New North End, and the changes being made to Church Street at the time.

Learning about the history of the Waterfront was really interesting. Overall, the Burlington waterfront wasn’t always the same as it is today. In fact, the waterfront didn’t always exist because it was all water before finally being turned into land. This land was immediately used for coal plants to power the city and trains that carried lumber. Everything changed when Bernie Sanders became mayor of Burlington in 1981. He fought to give the waterfront to the people of Burlington.

My education in BSD schools has been almost completely disconnected from the City of Burlington. If you plucked any one of my classes from BHS and plopped it into a random school in a completely different part of the country, I think it would blend right in. That’s one of the reasons why I’ve been enjoying BCL so much. I think that it is really valuable to be connected to the place you’re in. BHS’s motto has to do with grooming the future citizens of Burlington and  providing them with the tools to help the city thrive. Quite honestly, I don’t think that that mission is effective if none of our classes are grounded in place.

My education has not been connected to Burlington at all, except for going over local news occasionally. Much of what we have done in these past few days has given me knowledge of my city that I knew nothing about, and I find it almost embarrassing. There are small things around Battery Park that give me knowledge of my home, things I have neglected to read. Now, I am looking forward to exploring more hidden secrets of Vermont. Understanding more about Vermont might help with future evolution because the younger generation can learn what needs to be fixed and go into action.

It is valuable to learn the history of a place because if you can see what caused the city to change a certain way you can predict how the city will evolve from causes that are happening right now. 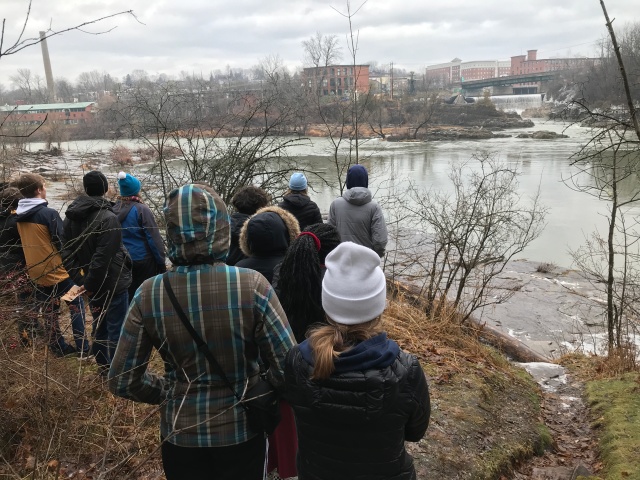 Students look out over the swirling water, and reflect on the blurry boundary between human and nature.

I do not think my education has been very connected to the city and its history at all. Before coming into BCL, I had never looked into the history of Burlington very in-depth in any of my previous classes. I might have learned a little bit about Samuel de Champlain but that is about as much as I have learned. It is very valuable to know the history of the city because now I can make connections from the present day, to the past. I can now understand why some of our city’s architecture is the way it is today. Knowing the history behind Burlington is very valuable to understand why the city is the way it is and how it came to be.

I feel that understanding the history and geography of the place you live is crucial. Being able to know the place is very important because it helps you feel more like you belong and more at home. Having the information helps you to understand why it is what it is today, what it was before and how it came to be what it is now. Before BCL I had very little information of what Burlington was like. Pretty much completely in the dark about the history of the lake, and the streets, and the buildings, why they’re there, and why we call them what we call them now 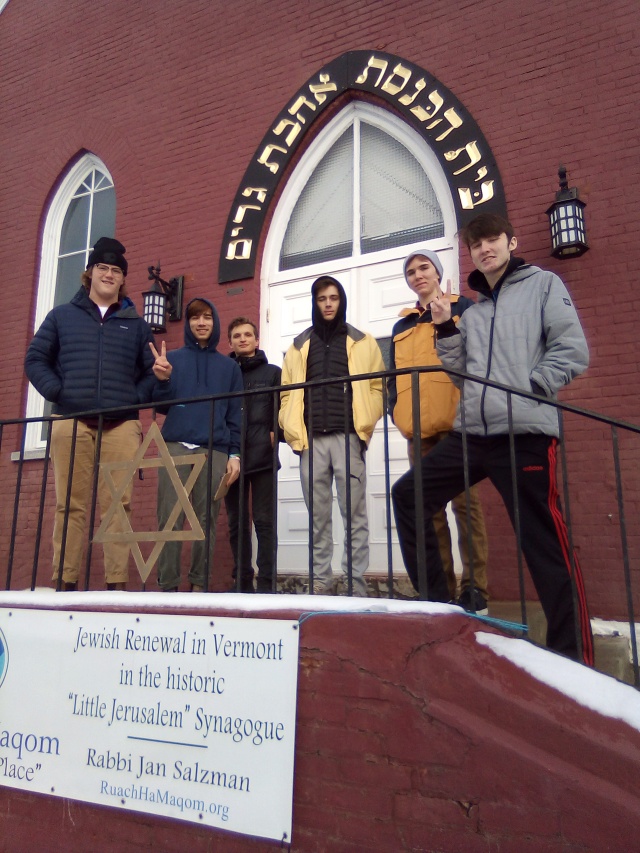 Layers of cultural history, just blocks away on Archibald St.

Understanding the value of the geography and history of the town were I‘m leaving has been really important for me. Since everything here is new and I don’t know the story of this city at all, it has been almost shocking to notice that even a yard that seems to be a common and insignificant park in reality has a deep and interesting history.

I am not a Vermonter. I moved here from Kansas City eight years ago. I always felt like I did not know Vermont like the people around me know it, but I thought I knew enough…But still, when we went to walk the trail at Salmon Hole, it made me realize how much I am not aware of my surroundings. I drive by the river almost everyday and never pay any mind to it. Walking through the trail made me realize how important it is. Also the sewage in the area and where it goes. With all that we learned this week I believe our trip to the river was my biggest eye opener. Understanding our environment is really important because everyone will be affected by it, in along with our kids and our loved ones. It is very important for us to take care of our city and do our part. Many of us tend to not pay any mind to the important things around us like nature and pollution. It all starts with us. We have to care to improve our environment to make it better for us and the future generation. 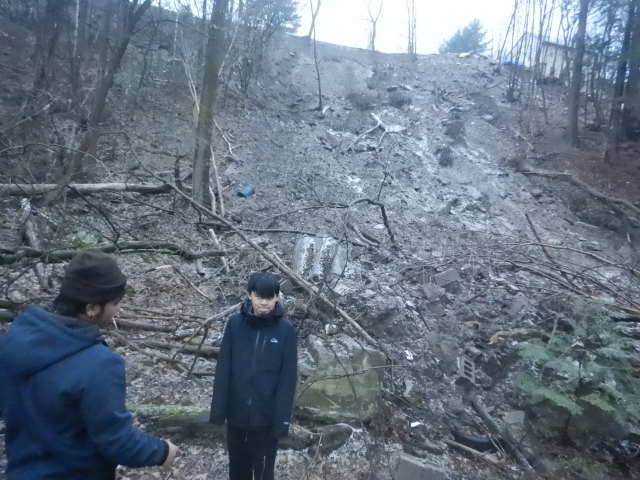 Adip isn’t sure what to think about the city’s recent landslide–and what it means for the future of Riverside Avenue.

I learned that in Burlington, climate change is a real problem. People usually don’t take it seriously, but storms are getting bigger.   It rained a lot on Halloween, and because of that everything up in the hill started falling down. We even saw a house, all the way up on the hill, and it was really close to falling down. 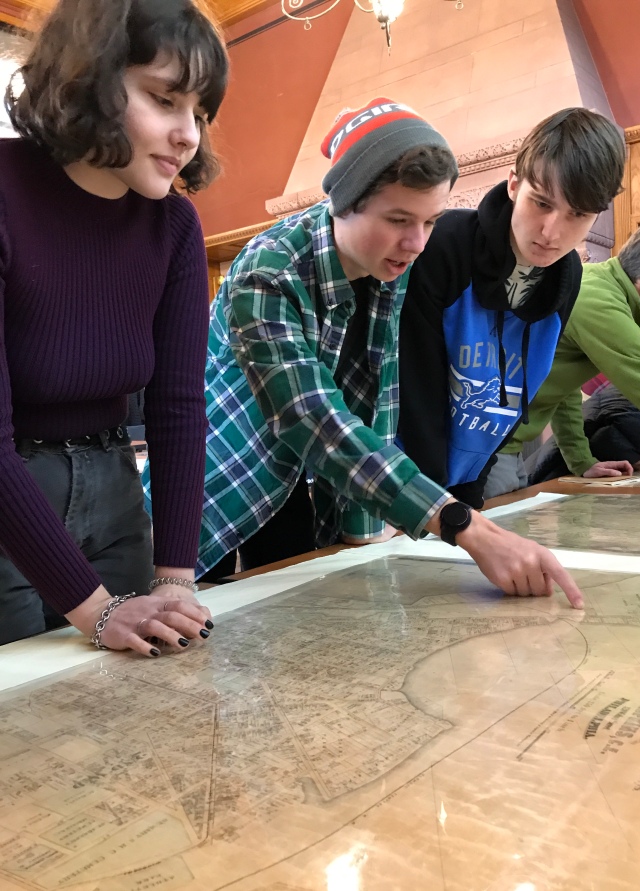 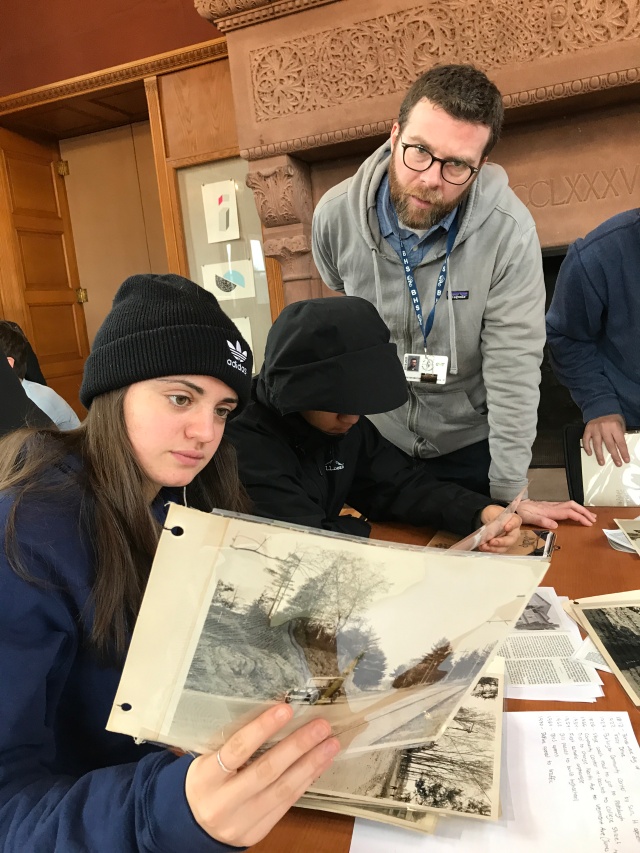 …and used historic photographs to see change over time.

If you compare historical maps, you can see the waterfront slowly expand and then change because of the supply and demand of the products being produced there. I wonder why it took so long to build stuff in the South End. It stayed pretty bare for awhile and then around 1853 they started to move in that direction. Is this because the industrial scene grew in the direction of the South End?

Looking at the interactive map, it seems like the downtown center of Burlington has not really changed since 1937. The thing I found most interesting however was the expansion of Burlington. In the older map, the city ends at where Main St turns slightly south and then it is mostly just farmland, and forests cut through with Route 2. Today, it looks like the city does not end. The highway is there and there is so much development within the university and the hospital. It makes me question how South Burlington and surrounding towns looked in 1937, and before. The University Mall was definitely not there, but what was there? One other observation was that there seems to be so many more trees in Burlington then, as compared to today. People in the city love trees today. What happened to all the trees?

Why is a nice place such as Burlington, a place that is on the rise, not as big as it should be? (I was wondering this because Burlington is on the side of the lake, and it surprises me that in 1830 there were not a lot of people there.)

After exploring the maps, I want to know why there was such a large growth between 1833 and 1853. I also wonder when people started really living down in the deep South End. Even in the most recent map from the 1800s, there is very little development in the South End and there are a lot of empty plots that have owners but no houses. Another thing that I noticed that I never really realized was how new UVM’s campus is. The interactive map showed that most of the big buildings hadn’t been built in 1937, which makes sense because the style is much more modern. I just don’t think that I ever put that together in my head, because for me those buildings feel like they were always there because they were.

So many questions come up… Why was there no development in the South end of Burlington?

Looking at the comparison map (1937-2018), it’s clear that the interstate didn’t exist back then, and there were no large roads like there are today. How did people and goods come to the city?

UVM was also not nearly as developed as it is today. When was the large development of UVM? It is interesting to look at these old maps and make connections with some of the buildings and architecture that is still there today. Which buildings are still here?

What did Burlington’s demographic of large and small landowners look like? Are there still a few rich names who own most of the property, or is it more diverse? How do changes like this fit in with the disappearance of the logging industry? Did Burlington’s population growth stall by the end of the 19th century?

If our community is considered to be thriving right now, was it back then? It had a lot of components that worked at the time, but didn’t have the advances in technology we have now. And in terms of geography, if early city planers chose to grow and branch out a different way then we did how would it have affected the city today? (For example, if central Burlington was more around the Intervale, etc..)