A WEEK WITH THE DANES

Let’s start with a little story telling – not how we usually start our blog posts, but we do believe in sharing stories, so here goes:

In 1957 my dad was an exchange student from Esbjerg, Denmark, at Milford High School in Michigan with AFS (American Field Services) for the school year.  He kept in touch with his American family, many of whom visited him in Denmark years after graduation.  25 years later, he attended his high school reunion in Milford, and the next year my parents decided to bring the family – me (Signe) and my two siblings – to the US for a year of our own family exchange experience.  That turned into us immigrating to the US and staying here permanently.  My dad’s American family became our family in the US, and they even attended my wedding in 1999.  If it wasn’t for my dad’s experience in the US as a high school student, I wouldn’t be sitting here typing this blog post about the past week of the Danes visiting BCL. You never know where the power of these exchanges and experiences across the world will lead. My dad still wears his senior class ring today, 65 years later.

That is just one story of an international education exchange that was life changing. And maybe, here’s another story that will ripple out into the future: A few weeks ago, BCL was finally able to host a group of 16 students from Skals International Project (a.k.a. SIP, a year-long immersive program, similar to BCL) from Skals Efterskole in Denmark.

From the beginning of our BCL semester in January, we began meeting and collaborating with the Danes remotely as we considered how communities around the world thrive. We explored a variety of topics together: the health of the planet, the natural world, mental health, sustainability and our different cultures.

Then, in late March and early April, during a COVID lull, the Danes made the trip to Vermont. We squeezed into our space at the Old North End Center and embarked on a week of cultural exchange and fun. We organized our week around a deeper study of the 17 United Nations Sustainable Development Goals (SDGs), taking several walking tours around the city to explore Public Art, waterfront history and Old North End neighborhoods while weaving in the themes of the SDGs. It was a unique way to give the Danes – and ourselves – new insight into our community. Special thanks to Kelly Manley, UVM ‘22, for guiding us on this Place Based Education project.

The Danes were very similar to us. During that first lunch period together on Monday, my table was almost silent. No one knew what to say across the table to the other group, only to their friends beside them. However, through playing games and laughing together in the afternoon, we became comfortable with each other. I feel like those moments throughout the week where we were all just laughing together, whether it was at a joke or during a game, we felt like one large group. All of the barriers were just dropped in those moments. As we’ve said all year in BCL, relationships are so important for learning. By taking the time to connect with the Danes through laughs and fun discomfort, I feel like we were one stop closer to digging deeper into real issues in the world. This experience gave me hope moving forward because it showed me that I can open myself up to strangers and create bonds with people I’ve barely met, which allows for us to work together more seamlessly. I hope that the world can come together more now that Covid is slowing down to have these experiences together, as a planet, and forge tight relationships across the globe so that we can fight the climate crisis together as one planet.

I think it is definitely complicated, but I also have hope. Talking with the Danes, I felt like they really cared about the sustainable development goals and they came from a place that valued finding solutions. One thing that surprised me was how easily we connected and how much we have in common. I asked a few of them what surprised them the most here, and they mentioned the same thing. They felt welcomed and included in our community and they said that was not entirely what they expected. This experience taught me how similar we really are. Even if we live and grew up in completely different environments, we still have similar problems and opinions. This gave me hope, the idea of the world having to work together is scary, but now it seems a little more attainable. In the end, everyone is pretty similar and we all care about the same things. Even though there are obstacles, like cultural differences and language barriers, working together is possible.

The Danes are just like me. They play sports, and they act just like normal teenagers would. Nothing different and we all connected so fast even though we are from two very different countries.The way they talk is different and they stick to themselves – very reserved. One thing that surprised me was how we bonded so fast and how well they understood English, even though it is not their first language. Some students only started to speak English due to SIP which started last fall. A moment that I felt the most connected across cultures is when we gathered to eat. Eating together isn’t just food for your stomach but is refreshing to the soul.

All in all, I’ve come to the conclusion that if we are going to solve world issues, we need to all be more aware that people in other countries are just regular people who probably think and act pretty similar to you and me. We all need to drop our pride and get along. This is kind of unrelated but I heard a podcast recently and in it they kind of jokingly suggested that all the leaders of the world should have regular sleepovers with each other and that we would gain so much more understanding from just seeing each other’s nightly routines than we ever would in big fancy meetings. I kind of like this idea a lot.

Our week with the Danes was a great success with lots of laughter and new friendships that we hope will last far beyond the week we spent together in Burlington.

Thank you to all the family, friends and everyone at BHS who welcomed the Danes and included them in their homes, classroom and many other activities. Thank you to community partners who shared their ideas, skills and time with us. The success of this exchange was due to the enthusiasm and support of so many people. Special thanks to John Canning, founder of Physician’s Computer Company and a great friend of BCL, who helped make this trip possible with generous financial support – and for sending the Danes off to NYC with an evening on Broadway.

Here are more pictures and student voices that tell the tale of our time together:

It’s been very fun laughing and having fun with everyone from BCL, when at the start of the week it was awkward for a little bit.

I think that getting to hangout with new people has been my favorite part because it’s really cool to be able to connect with others and get their insight on everything.  I have learned a few sentences in Danish!  We should zoom regularly and visit them in Denmark.

I especially enjoyed opening up to people and getting a chance to be opened up to. I’ve really enjoyed learning about cultural differences and similarities.  General stuff about Denmark but also it’s helped me learn (or realize?) a lot about being able to relax and have fun.

It was really fun to meet all the Danes. I liked going out to dinner and having the Danes at my house for dinner. I learned a lot of things about Denmark. I also learned a lot more about what they like to do.

I think we have done a lot of fun games together, and I think we just really connected with each other.  I have seen how they do American high school and just how the BCL class works together.

Just getting friendly with each other and hanging out in and after school hours.  That they all have played basketball at one point in their lives

It has been really fun learning about a different culture. It is nice meeting new people. 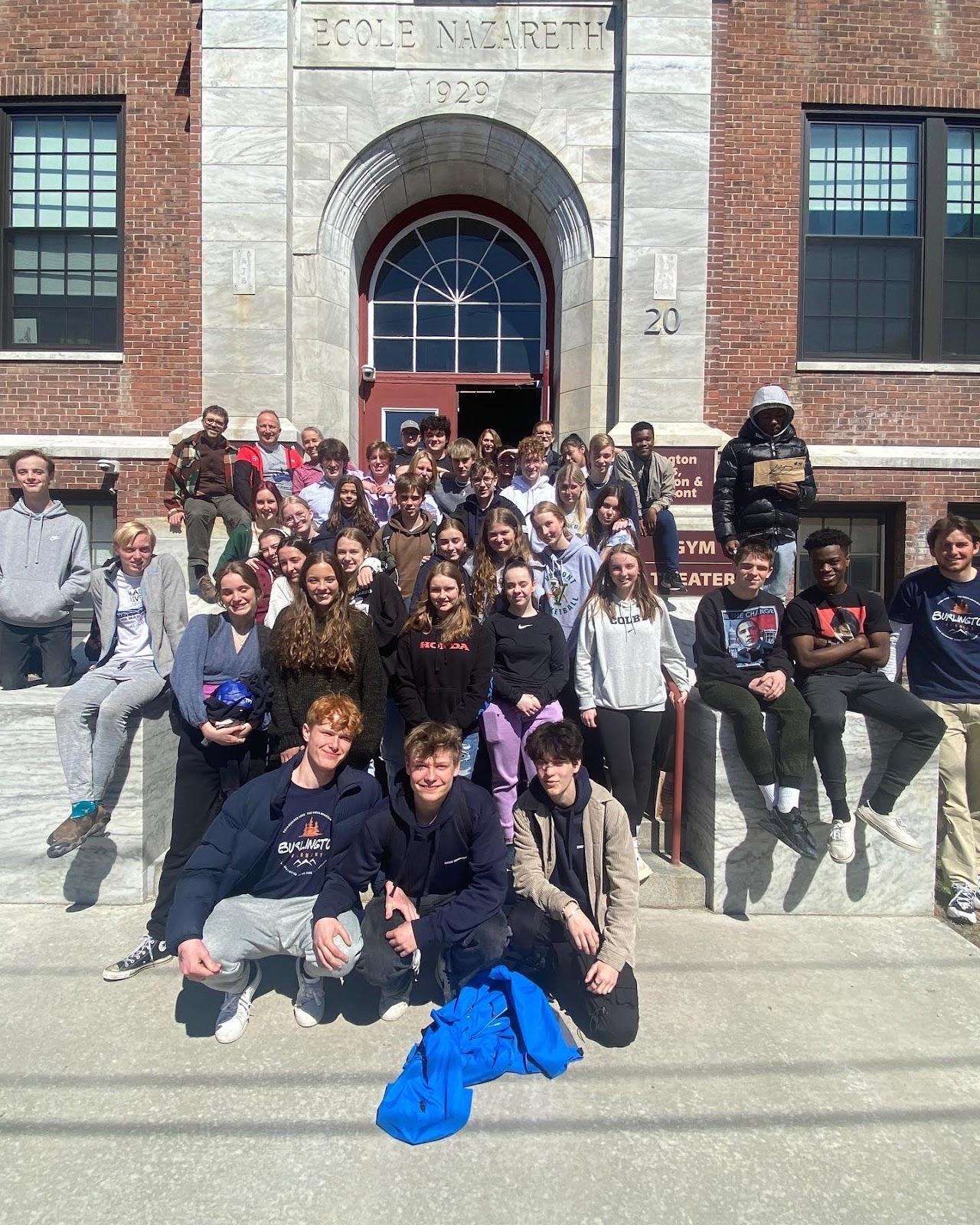